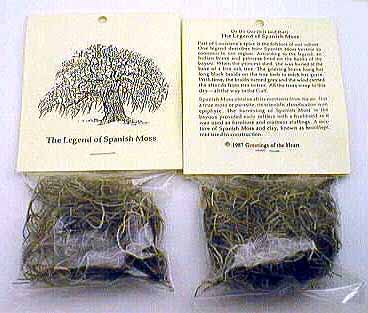 Legend of Spanish Moss packet contains real bayou Spanish Moss. Back reads “On Dit Que (It is said that)–Part of Louisiana’s spice is the folklore of our culture. One legend describes how Spanish Moss became so common in our region. According to the legend, an Indian brave and princess lived on the banks of the bayou. When the princess died, she was buried at the base of a live oak tree. The grieving brave hung her long black braids on the tree limb to mark her grave. With time, the braids turned grey and the wind carried the strands from tree to tree. All the trees weep to this day–all they way to the Gulf. Spanish Moss obtains all its nutrients from the air. Not a true moss or parasite, its scientific classification is an epiphyte. The harvesting of Spanish Moss in the bayous provided early settlers with a livelihood as it was used as furniture and mattress stuffings. A mixture of Spanish Moss and clay, known as bousilliage, was used in construction.